Hey, everyone! Obviously, I am way, way behind with my posts on this US trip because I’m already on the fifth leg, and a lot has happened since my last post (which was still when I explored Los Angeles for the first time). I thought I’d be able to sustain updating daily, but it turns out that it was a lot harder than I expected due to a number of factors—time being the main reason. I have so many stories to share, but I’ll get to that as soon as I finish this update on Day 6 of my trip, which took place last March 24. If you’ve been following me on Instagram, I update there way more often! 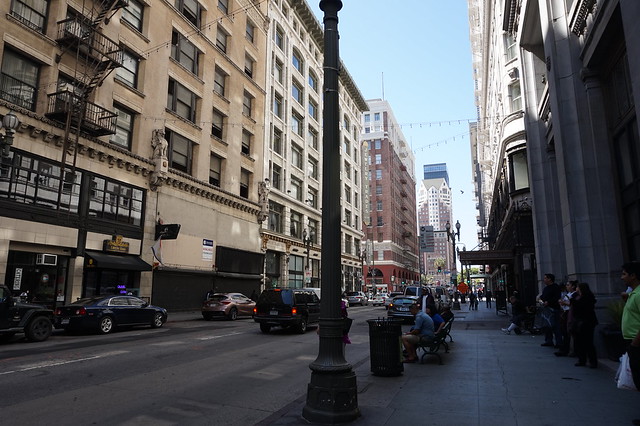 Just to recap, I already got a taste of downtown during Day 4 as Mariel took me around along with a couple of Povedan batch mates. Day 5 was sort of a rest day, since Mariel had work—but I was able to explore her area in Buena Park, and we even had dinner in Neptunes Raw Bar in Cerritos.

The Slut by Egg Slut

Day 6 was full of adventure the moment I woke up! Early in the morning, I rode with Mariel’s youngest sister who works in Torrance, as she dropped me off at a bus station and I rode the Metro Silver Line that took me straight to Union Station in Downtown Los Angeles. From there, I met up with the Cupcake’s good friend and kabarkada since high school in Ateneo, Yuzon, who’s taking up a Master’s Degree at UCLA. We had breakfast at Egg Slut in Grand Central Market, before checking out the inside of Bradbury Building, walking to The Broad, and taking our time looking at different artworks and installations.

After visiting the Broad, I also got to see the outside area of Walt Disney Concert Hall, before we walked a few blocks down to a popular food truck, Kogi, that specialized in a fusion of Korean-Mexican grub. Incidentally, it was located at the top of Bunker Hill, so we ate it while sitting down on a bench that overlooked that part of the city. It sounds comical, but I’ve always wanted to do something like that. Back when I still worked in Makati, I tried to eat my lunch at the park, but the benches were too hot to sit on—not to mention the weather was scorching. Just walking to the park made me sweat, so what more if I stayed the entire hour to finish my food? So yeah, it was a nice moment to be munching on a delicious burrito while enjoying the view and the cool weather, and having a pleasant conversation with a good friend. It felt so—cosmopolitan? Haha!

As soon as we finished our lunch, we commuted and walked towards The Last Bookstore, which Mariel had mentioned a few times was a place I was going to love, and did she know me so well! It’s a breathtaking two-story space in the Spring Arts Tower on the corner of 5th and Spring, that showcases thousands of new and second-hand books and records, some of which were used to create a maze-like setup. There were interesting vaults that housed more books, and just being inside was overwhelming because I didn’t know where to start!

The second floor also had art and novelty shops—my favorite was the one that sold typewriters, old cameras, maps, unique gift cards, and antique trinkets that make such lovely decorative pieces. Interestingly enough, The Last Bookstore was named to be ironic though it’s become more appropriate these days because a lot of physical bookstores have been closing down due to the impact of Amazon and e-books.

Our last stop in Downtown Los Angeles was Staples Center, but we were fortunate enough to drop by the same afternoon that they unveiled the statue of Shaquille O’ Neal. The place was one, big Laker party with activities, games, and photo op areas to commemorate Shaq. We were told that it was also one of the rare moments that they took out all three trophies of the Lakers, which were displayed so that the public could take photos with them.

After checking out the event at Staples Center, we met up with Yuzon’s girlfriend, Nads, and drove to the legendary Pink’s Hot Dogs, where we had merienda, and as usual, the food did not disappoint. If there’s one thing that I’ve been doing a lot here, it’s eating way too much for my own size. It’s become a struggle actually—because I’m not used to the gigantic serving sizes as compared to how food is served back home. Here, the smallest cup of coffee in McDonald’s is actually the medium size in ours!

I was so thankful that Yuzon and Nads were able to bring me around because after eating at Pink’s, we got to explore La Brea Tar Pits Museum, which features a museum where you can check out exhibits, ice age encounters, a fossil lab, and the group of tar pits themselves surrounding the museum, including what kind of excavations were found and current excavations being discovered.

We then headed to UCLA where Yuzon gave a quick tour of his campus, which as expected, was breathtaking. I genuinely would have loved to study there, given the opportunity (and funds). Haha.

As soon as the sun started to set, we made our way over to The Grove, where we had crepe, and then met up with Mariel in the Arts District to have some drinks. It was definitely one of the more eventful days of my stay, and it was nice to have spent it with friends from the Cupcake’s side and a friend from mine.

Stay tuned as I try to catch up on all my adventures in detail here on the blog, but in the meantime, do follow me on Instagram for quicker updates!

How to Save Money from Salary: Ways Technology Has Helped Me

Getting My Flu Shot at Home Thanks to Kindred

Excited to talk about my #breastfeedingjourney as

Nothing like flowers and plants to brighten up the

In case you missed it (and because a lot were aski

8 months in and you’ve tripled your birth weight