Hello again! It’s Sunday morning here, which means it’s already Monday there. This time last week, I was already on the plane, and I can’t believe a week has already passed since I got here. Thanks to Mariel, I’ve visited a ton of sights, including a lot of beaches and famous landmarks, plus I have been eating nonstop! 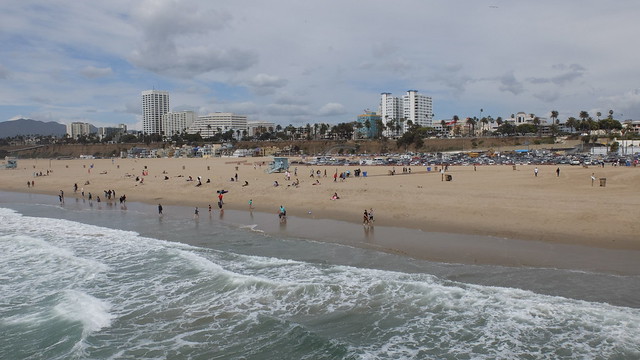 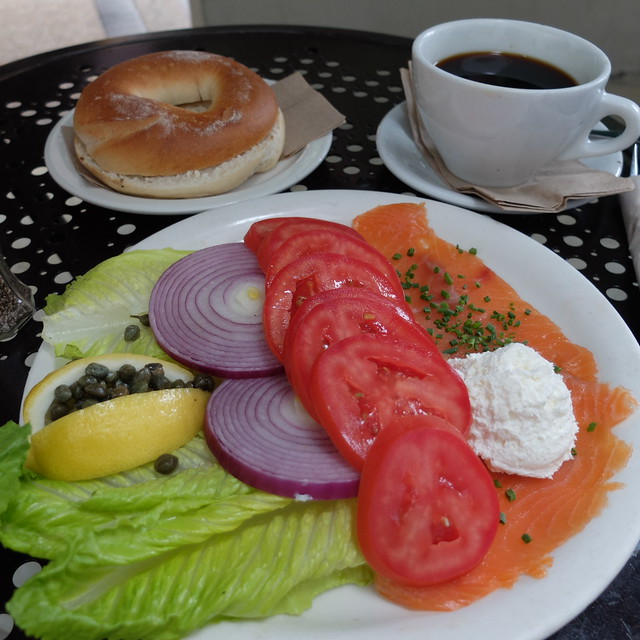 Anyway, last March 22 (Wednesday), we headed to Santa Monica because I really wanted to see that side of LA. We had brunch at a well-known organic coffee house, Urth Caffe, where I thoroughly enjoyed a cup of coffee and their Smoked Salmon Plate, a 100% smoked salmon dish served with bagel, cream cheese, capers, chives, Roma tomatoes, romaine lettuce, red onions, and fresh cackled pepper. My mouth is watering just thinking about it. 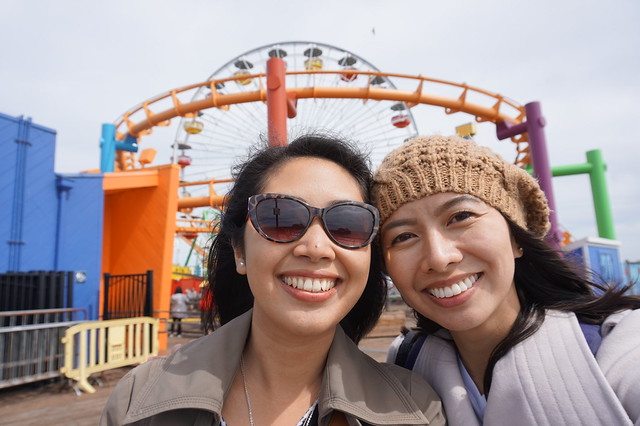 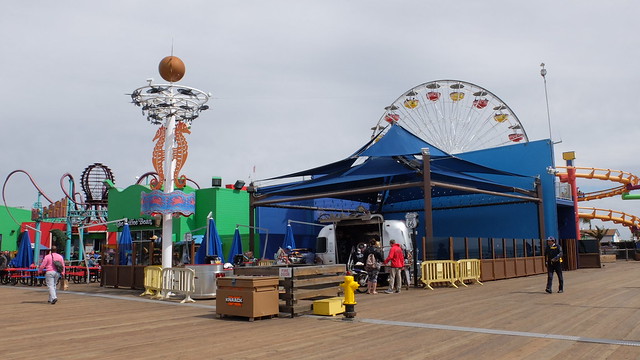 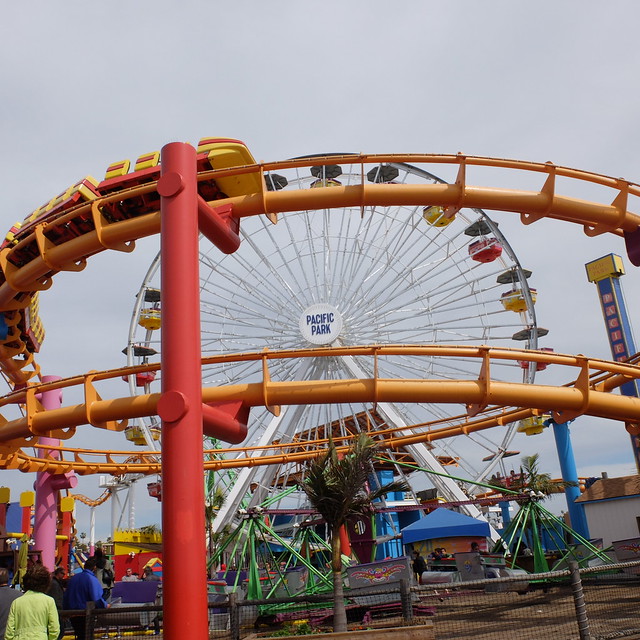 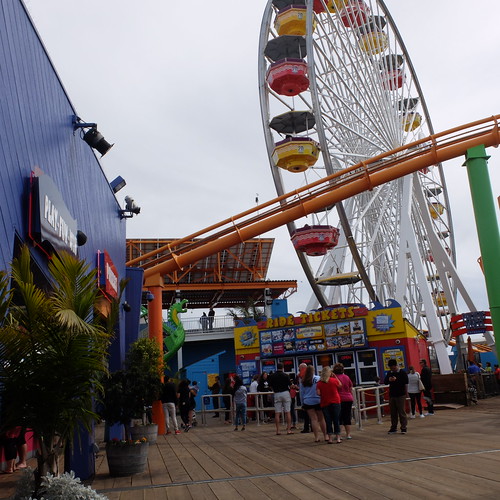 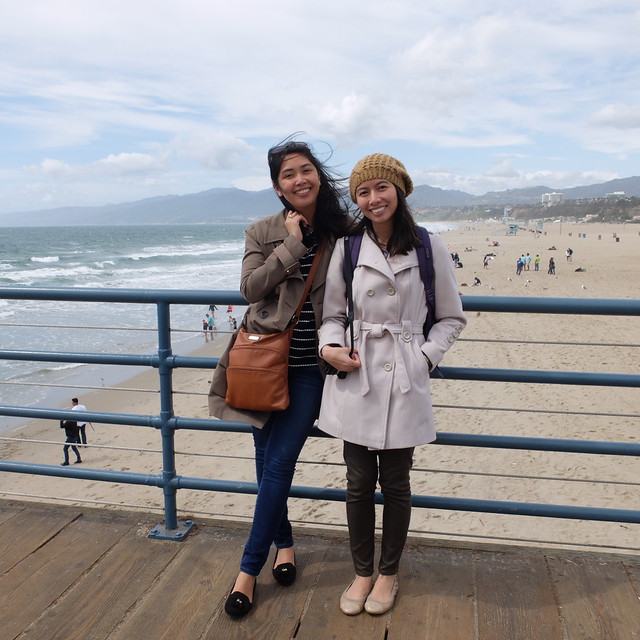 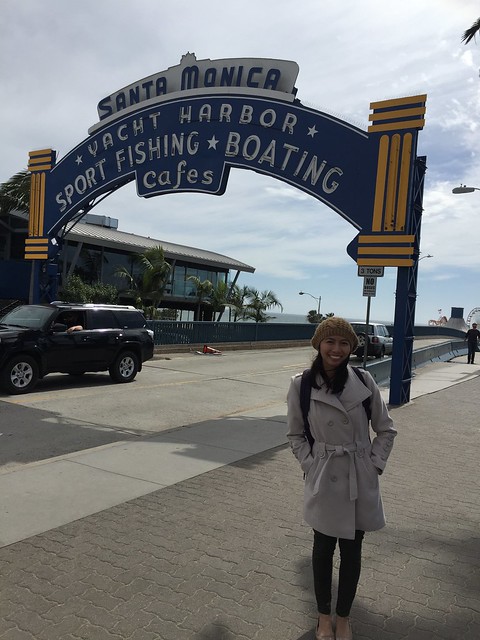 After brunch, we walked to the Santa Monica Pier and enjoyed the sights as well as all the interesting things we could see—from the Pacific Park (a theme park on the pier), to the seagulls and pigeons who weren’t afraid to just swoop by you, to the vendors and painters, to a guy who danced and performed on the walk for tips. The weather has been very cold (around 10 to 19 degrees), and though I packed my Cesa bikini for this trip thinking I’d be able to use it, I’ve been layering up and wearing all my thick jackets and trench coats. I even had to borrow a couple of bonnets from Mariel to keep my head and ears warm. At night, I’d have to wear long socks and a sweatshirt with my pajamas just so I can sleep soundly. I’m a really lamigin person, but so far, I’m enjoying the weather!

Once we finished walking around the pier, we walked towards Third Street Promenade, a strip of shops on a street that was closed to vehicular traffic years ago and is now lined with a variety of stores ranging from traditional to unusual. I got to buy one of my brothers a pasalubong here.

After shopping, we drove to the Venice Beach Grand Canals, where I immediately fell in love with all the small and quaint houses full of color and character. Each one had a dock and tiny boats, and I imagined myself living in one of them, enjoying a simple and quiet life. In that alternate reality, I’d come home every evening after work at a library or a bookstore or a coffee shop, then I’d sit on my floating dock while sipping on wine and gazing at the stars. Out of all the residential areas I’ve seen here in California, the houses on the Venice Beach Canals were my favorite. (A little fun fact: this was where Ashton Kutcher and Jennifer Garner shot their scene in Valentine’s Day.)

One of my favorite houses in Venice Beach Grand Canals

We took our time just walking around and looking at all the different houses. A little after 5pm, we started driving towards downtown LA, where Mariel showed me the outside of Bradbury Building (they close it after 6pm, so we couldn’t enter and see the inside anymore), then she also took me to see Bunker Hill and Angels Flight.

For those who don’t know, Bradbury Building is an architectural landmark best known for its walkways, stairs, elevators, and their ornate ironwork. It’s been the site of many movie and television shoots, including one of my favorite films, 500 Days of Summer (the scene where Tom met Autumn). Bunker Hill was also another very familiar place that I was so thrilled to see, as this was the infamous bench in 500 Days of Summer, where Tom did a sketch of the city skyline, and also where the quote by Summer was said: “I just woke up one day and I knew what I was never sure of with you.”

Unfortunately, we couldn’t go inside because it was gated and locked, so we got to see it from a different view. Bunker Hill was also right beside Angels Flight, another landmark which has two funicular cars, Sinai and Olivet, running in opposite directions on a shared cable on an inclined railway. It is said to be the shortest railway, and its purpose is to bring passengers up and down Bunker Hill. It’s had a few renovations and redevelopments since 1901 and right now, it’s temporary closed but set to reopen on Labor Day 2017. (You’ll see this on my next post, where I got to explore downtown LA a little bit more with the Cupcake’s kabarkada, Yuzon!)

After our little exercise climbing up and down flights of stairs in between Bunker Hill and Angels Flight, we crossed the street to Grand Central Market, where we had dinner with a couple of Povedan batchmates who study and live in the area. Grand Central Market is well-known for their selection of different food stalls—so imagine it to be a combination of Mercato and Hole In A Wall, except this one has its own building.

We went to Arts District as well, because they wanted me to try the beer at Wurstkuche and the pie at The Pie Hole (they were right across each other). It was so much fun, and I was so glad I got to experience tidbits of downtown LA, which I only used to hear about from my mom when she worked there before. It was nice to actually see it with my own eyes, and I tried to imagine myself in her shoes—riding the bus to work and walking around downtown.

So that was Day 4 of my greatest adventure to date (I counted March 19, the day I left, as Day 1). I still have a lot of upcoming posts on my travels, but I hope you guys are enjoying my updates on Instagram, and reading my stories here on the blog just as much as I love writing them!