I think Tumblr lessens suicidal rates all over the globe.

I didn’t think I was going to create a Tumblr account (because I thought it would be such a hassle) when the great KChan kept trying to convince me months ago–but I ended up making an account anyway last October just because I needed an outlet and I didn’t want people to have to deal with my emo, tantrums, and crap all the time. So yay, Tumblr! You save lives!

I was inspired to write this because earlier today, my sister, two cousins, Tita and mom witnessed a girl who committed suicide in EDSA near Guadalupe. My mom told me the body was literally just inches away from the van. She landed on her face first, and they could barely recognize her. It must have been so traumatizing for so many people, especially the ones who saw it happen.

I pray for that girl, and for everyone else thinking to do the same thing. Do us a favor and don’t do it. People care, and the world isn’t as apathetic as you think. Get Tumblr. You’ll see why it’s true. 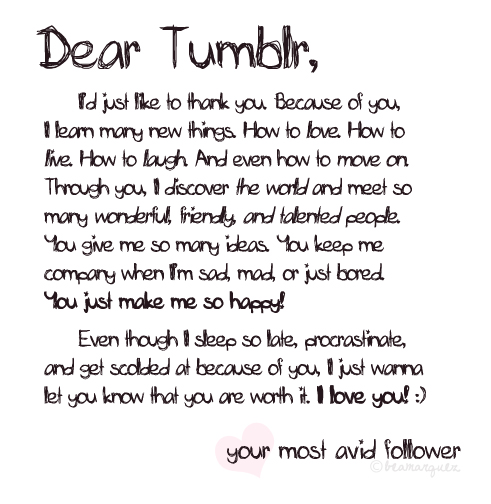 Greta’s Junkyard Conversations: A Series to Inspire and Uplift

#WorkNow: How I Found My First Job with JobStreet Philippines

How Animal Crossing Has Helped Me Cope During the Quarantine

My name is Gretchen Gatan. I’m a writer, editor, and makeup artist. Writing is my passion, and this blog serves as a creative outlet where I can write about topics on beauty, travel, food, and lifestyle—and occasionally my random thoughts and tantrums. Greta’s Junkyard is literally a dump site of my favorite things!

Not one to wear colors outside the nude and neutra

First time to attend an e-vent today with @airopti

Oh my gosh—drum roll, please! 🥁 My next guest

Had the most productive day today. 💜 Did a lot

30 going on 13 💜 Video calls with @marielangele

GIVEAWAY ALERT! 🚨 In case you missed my talk on