Ten Things I Learned From the Corregidor Island Tour

The first and last time I went to Corregidor was 20 years ago. I was in Kindergarten then, and my Lolo, who loves touring the Philippines and who I’m pretty sure I got my sense of wanderlust from, decided to take me and the rest of my family. I barely remember much about the trip though, except for a tunnel that we entered, and the huge guns scattered all over the island.

Recently, I went back to Corregidor—this time with the Cupcake and his family. We went on the Corregidor Island Tour of Sun Cruises, a ferry service that was established in 1988 and knows the island by heart. You can visit their website for their packages and rates, or if you want to book online. 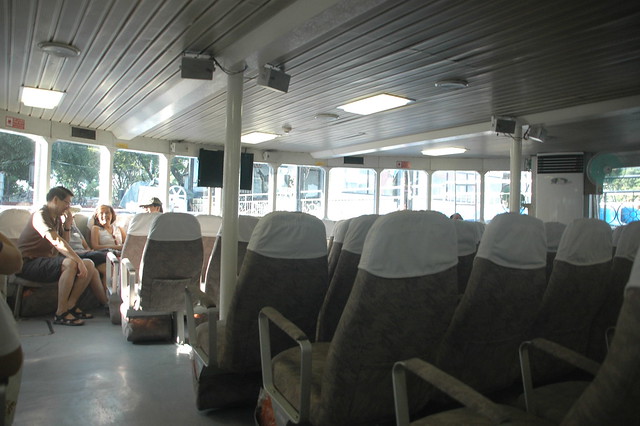 Goofing around with my seatmates, the Cupcake and Baby Cheng 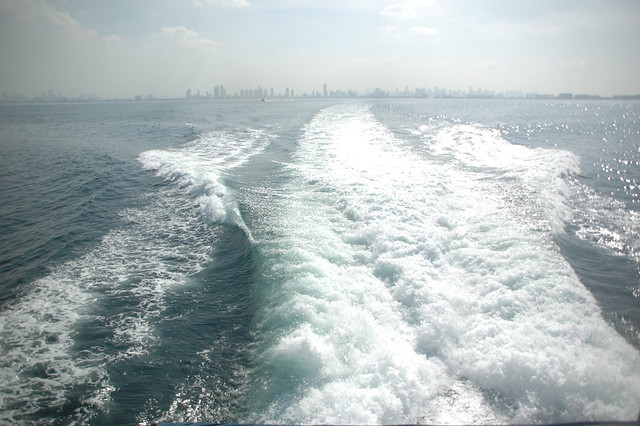 We arrived at the port along Manila Bay at 7am. Boarding time was at 7:30 because departure was at 8am. Unfortunately, the coast guard was a little late so we ended up leaving past 8:20. We arrived in Corregidor at around 9:30am, where we were immediately led to our numbered buses—these buses resembled what the Americans used to ride back in World War II. 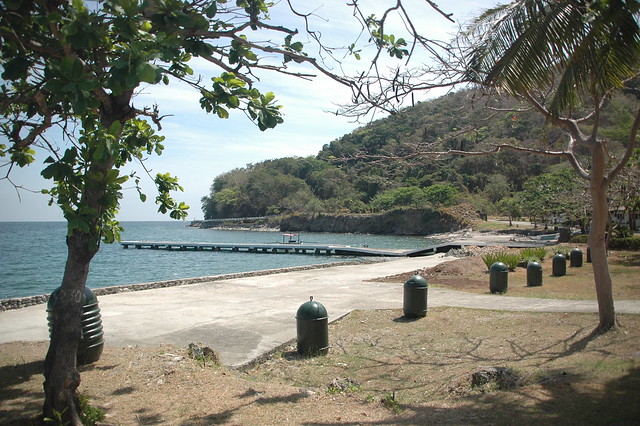 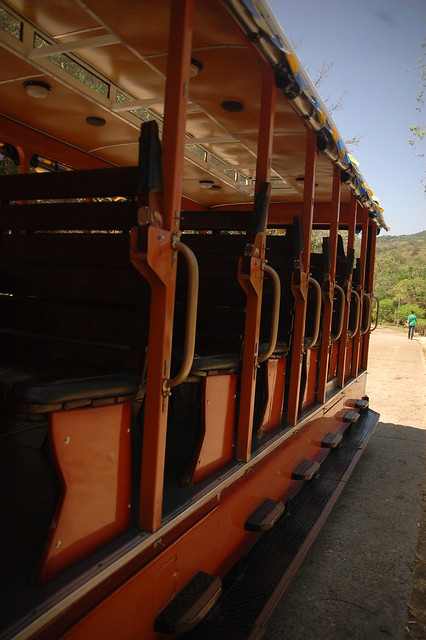 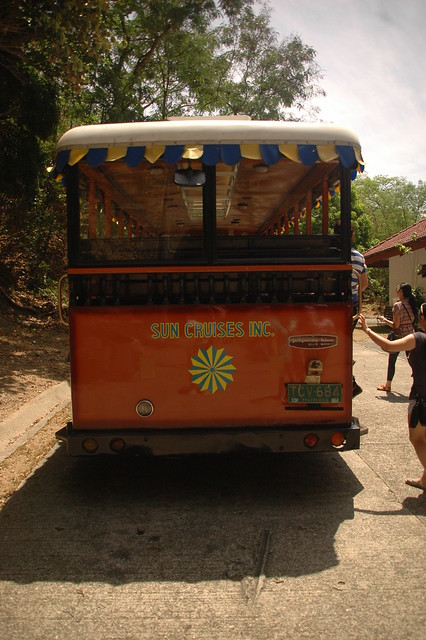 The island is divided into four sectors: Topside, Middleside, Bottomside, and Tail End. The Topside is the nerve center of the island fortress, where the Mile-Long Barracks, Cine Corregidor, Pacific War Memorial Dome, and Eternal Flame of Freedom are found. The Topside was where the highest officials stayed as well. The Middleside contains the Filipino-American Friendship Park, Middleside Barracks, and Army Hospital. The Bottomside is where the Gen. McArthur Park, San Jose Chapel, and Corregidor Hotel are located. Unlike the first time I visited, Corregidor is now open to overnight stays. You can opt to bring tents and camp out if you want to go ghost-hunting. There’s also a beach where you can swim. Lastly, the Tail End is where the Filipino Heroes Memorial, President Manuel Quezon Park, President Sergio Osmena Park, and Japanese Garden of Peace can be visited.

We didn’t tour the island in chronological order. Instead, we started with the Malinta Tunnel, followed by the Tail End. Then we headed to the Middleside and Topside, before having our buffet lunch in the Corregidor Hotel (which was included in the package), then ended with the Bottomside. 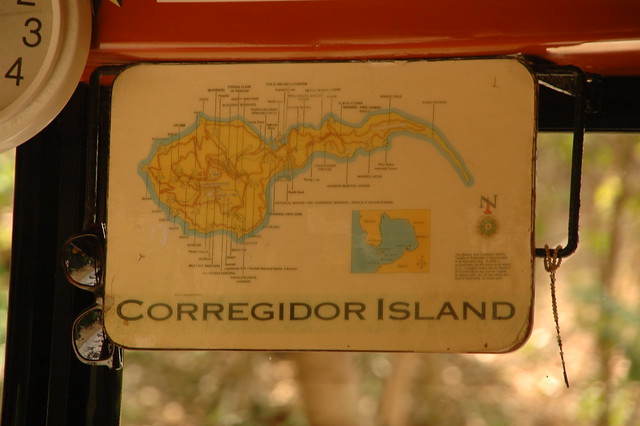 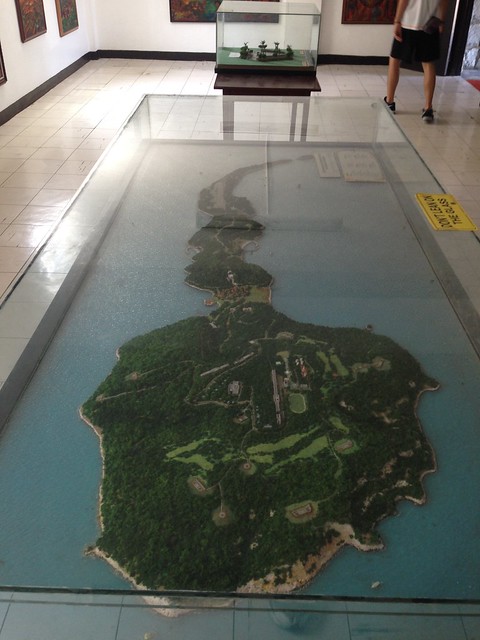 Our tour guide, James, was one of the funniest and wittiest tour guides I’ve ever encountered. And since he’s been with Sun Cruises for 16 years, he took us on a unique experience around Corregidor Island. As mentioned, our first stop was the Malinta Tunnel, where the 1000-Bed Hospital was found.

As soon as you enter, you get this eerie feeling that you can’t seem to ignore. The sound show was under repair at that time, so James took us inside the different areas of the tunnel instead. 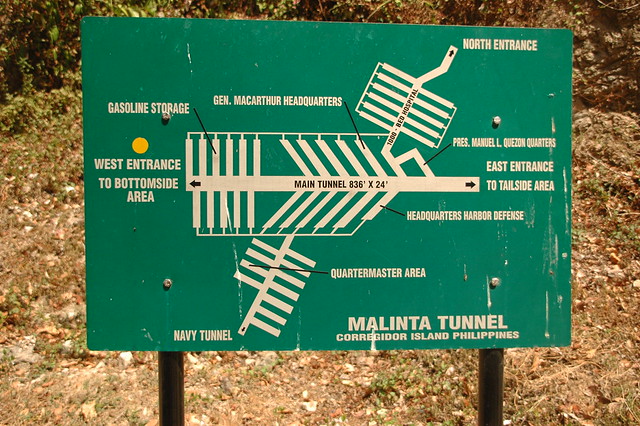 There were many things I learned from the Corregidor Island Tour. It was like I had a refresher course on Philippine History:

10. The Malinta Tunnel served as a base and a hospital for both the Americans and Filipinos during World War II. McArthur and President Quezon hid here as well.

9. There was a separate area in the Malinta Tunnel for the female doctors and nurses. This was guarded by a heavy gate. Once the patients were all sound asleep, they would lock themselves inside to prevent rape from happening. It was said that McArthur used to sneak inside in the middle of the night.

James also told us that a psychic had been to the Malinta Tunnel already, who said that to this day the spirits of the nurses and doctors still roam around doing their routines and tending to the patients.

At night, you can even hear the typewriters typing by themselves.

At one point, James wanted us to experience how it felt like to be in the tunnel during World War II, when bombs used to drop every so often. So he made us all turn off our flashlights (provided by Sun Cruises) and discouraged us from using our cellphones. We were forced to walk a super long hallway in pitch black!

The other side of the tunnel.

8. This was how Cubao, Quezon City looked like during Quezon’s time.

After visiting the Malinta Tunnel, we went to the Filipino Heroes Memorial which contains 14 murals. Beside these were the Statue of a Filipino Woman, with the inscription: “Dedicated to the Filipino Woman, for her involvement in the many events in our history. But more importantly, served as a symbol of peace and inspiration to our gallant men in their fight for the preservation of our honor and freedom,” the President Manuel Quezon Memorial Park, and the President Sergio Osmena Memorial Park.

7. Of the hundreds of Japanese soldiers that fought, none of them surrendered to the Americans because surrendering is considered a dishonor to their country. So instead, they committed suicide.

This was where the Japanese hid their suicide ship.

Our next stop after the Filipino Heroes Memorial was the Japanese Garden of Peace—featuring a stone Buddha, a shinto Shrine, and other Japanese memorial shrines and markers used as a praying area for Japanese war veterans, and the families and relatives of Japanese soldiers, who served or were killed in Corregidor during World War II. Within the garden, you’ll also find anti-aircraft guns.

We briefly passed by the ruins of the Middleside Barracks, before heading for Battery Way, where they kept the fattest weapons ever.

5. “Battery” is a military term to describe a group of artillery.

Battery Way was named in honor of 2nd Lieutenant Henry N. Way of the 4th U.S. Artillery who died during his service in the Philippines in 1900. Armed with four 12-inch mortars, it was designed to penetrate the thin deck armor of warships and against any enemy entrenched on higher grounds in Bataan. To fire each mortar, a standard crew consisting of 14 men were needed.

This was the Ordnance Repair Shop where all the weapons were repaired.

Another Gun Emplacement we were able to visit was Battery Hearn, a 12-inch west-ranged gun which had a maximum range of 29,000 yards and was capable of firing in all directions!

4. The Mile-Long Barracks is one of the most popular spots in Corregidor. It was a three-story concrete building, which was constructed to be hurricane-proof. This was where the American soldiers stayed/lived in. The headquarters of McArthur was also located inside.

Just a few blocks away from the Mile-Long Barracks is the Cine Corregidor, which was actually a movie theater to cater to the entertainment needs of the soldiers.

This was the indoor swimming pool.

One of the coolest parts of the Corregidor Island Tour was when we went to the Topside, and even saw the entrance of the Malinta Tunnel from where we stood. You can also vaguely see the shape of the island, which looks just like a tadpole.

This is where you can also find the Pacific War Memorial and Eternal Flame of Freedom.

3. The Pacific War Memorial was built to honor the Filipinos and Americans who served in the Pacific War. They say that every 6th of May, the day of the Battle of Corregidor, the sun shines perfectly through the hole and illuminates the entire memorial.

With Kuya Jake and Baby Cheng

The Eternal Flame of Freedom commemorates the sacrifices, hopes, aspirations, and the heroic struggle by the United States and the Philippines to preserve freedom for future generations.

2. At the current site where this lighthouse stands, there used to be a lighthouse constructed by the Spaniards in 1836, but was destroyed during World War II. This new replica is the highest point of the island, where you can see a breathtaking view of Corregidor, Manila Bay, South China Sea, Bataan, and Cavite.

Our last stop after lunch was the Bottomside, where I discovered that whatever I had been taught in grade school was a lie. Near the ruins of Lorcha Dock is the Gen. Douglas McArthur Park, where his famous “I Shall Return” message is inscribed. But did you know that:

1. McArthur said his famous last words, “I Shall Return,” when he was already in Australia? It was only when he returned to the Philippines that he uttered the words, “I Have Returned.”

So those were just ten things that stuck to me after the Corregidor Island Tour. There are more of course, but maybe I’ll save those for you guys to experience yourselves. It was so much fun, and if you’re up for an adventure, you can try staying a night or two to experience the eerie feeling that James was talking about when he said that there’s something about the island that messes with your head after staying there for quite some time. Are you game to take the challenge?

Ten Things I Learned From the Corregidor Island Tour