Last Tuesday, I shared on my Instagram stories how much I get anxious whenever I’m placed in a completely new environment. I guess it’s all part of being such an awkward introvert, especially when I know I’m going to be introduced to a group of people I’ve never met in my life—like last weekend, when I attended an orientation with the Cupcake and his family, and it literally felt like I was getting an asthma attack, because I didn’t know what to do with the situation.

A couple of weeks ago, when former college schoolmate (from Ateneo), July 2017 #CalyxtaGirl, and one of the minds behind Sunnies Face, Jess Wilson, sent me an event invite via Facebook to the Sunnies Face Launch Party, I have to admit—I felt a little bit anxious. You’d think by now, after all these years of blogging and attending events, I’d be used to it already. But it’s usually the case every time, so I try my best to put a smile on my face, pretend I’m not nervous, and fake it (until I eventually make it!). That’s exactly what happened during the Sunnies Face Launch Party last night at 8 Rockwell. I entered the scene alone (OMG, every corner was legit Instagram-worthy), bumped into a few familiar faces, ended up hanging out with another schoolmate (this time, from Poveda!), Rosenthal Tee, and having a couple of yummy drinks—all while enjoying the newest lippies currently taking the local beauty world by storm—the Fluffmatte. 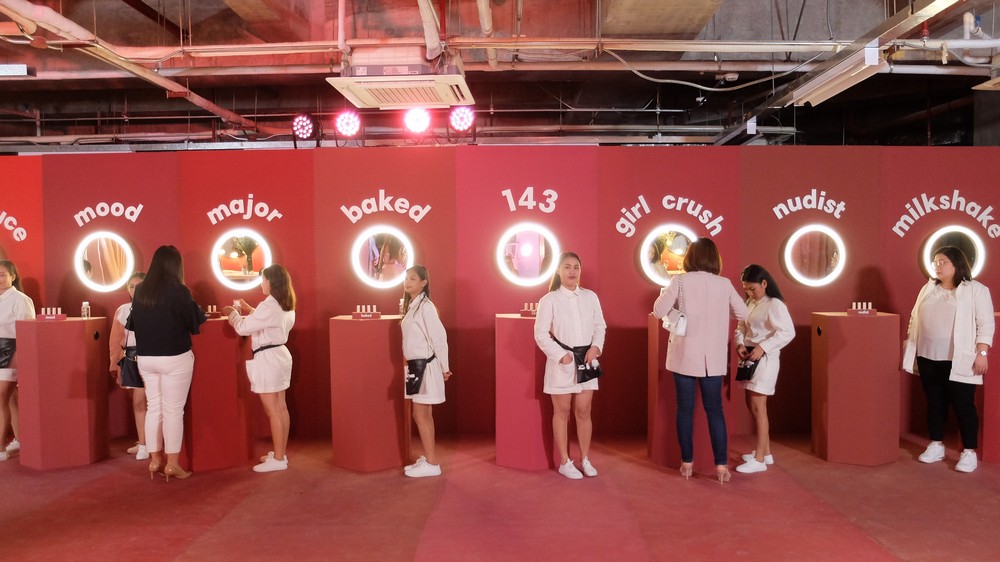 With Gia Banaag and Rosenthal Tee (Photo by Magic Liwanag)

I actually first heard about Sunnies coming up with their own beauty brand last December 2017 during an interview brunch with January 2018 #CalyxtaGirl, Martine Cajucom (of course, I couldn’t talk about it with anyone yet, because everything was off-the-record), before swatching the products last May during a meeting with Jess, and I knew then and there how much of a hit it would be. Not just because of the branding, and the creative minds behind it, but because of the genuine quality of the lipsticks that were still reasonably priced. There’s not one shade in the collection that I wouldn’t use, because all nine are incredibly wearable—whether it’s to the office or school, during a date, at a meeting, or to a brunch with family. Jess shared that so much thought was put into these shades, and it took a lot of debates (and I assume, sleepless nights!) to come up with the final nine.

All nine shades of the Fluffmatte are the basic shades that every Filipina needs—from a sophisticated almond nude (Nudist), to a warm and subdued pink (Milkshake), to a toasted berry rose (143), to a cool-toned red (Major), that freaking looks good on just about everybody!

In terms of packaging, the lipstick has a modern minimalist feel to it. It comes in a cream-colored tube that feels heavier than it looks, which means you’ll probably get more of the product as well. The bullet itself has a powder-looking coat, and one swipe gives you the full color payoff. During my meeting with Jess, I had only swatched the colors on my arm. But last night, I finally got to try Major on my lips. It was the shade I was most excited about, because I don’t normally wear red lipstick. Not because I can’t or I refuse to, but simply because it’s hard to look for the perfect cool red that looks good on me. One look at Major, and I knew it was the ONE.

Major complemented my orange-y makeup look and peach mesh dress during the Sunnies Face Launch Party, and one thing I noticed right away was how lightweight it felt. I honestly thought it might have been all hype, but it is true that the formulation is powdery matte yet non-drying, and it felt very comfortable and weightless on my lips. I was also amazed that it didn’t transfer to my wine glass the whole evening—my trick was after I applied it, I blotted my lips on a sheet of tissue paper. From the moment I applied it at about 7pm up until I got home at around 11pm, the color on my lips was still full (despite eating and drinking)—so I would say that it lasts long as well. (UPDATE: I think it’s also important to note that I was originally wearing Ofra’s Long Lasting Liquid Lipstick in Rio, before removing it a bit and applying the Fluffmatte—so that might have helped make the product more transfer-proof. I’ve been using it alone lately, and I noticed that it does transfer a little on glass when not blotted on tissue paper.)

Today, I tried on Milkshake, which is a warm pink nude. I love that I can wear it with just Glossier’s Boy Brow and Cloud Paint in Storm, and I look like I’m put-together already. I’ll try to post looks on my Instagram soon! But in the meantime, here are swatches of Milkshake and 143 under white and warm lights.

Under white lights: Milkshake and 143

Under warm lights: Milkshake and 143

Fluffmatte will be available at Sunnies Face in Glorietta and UP Town Center beginning August 10, 2018 for only PhP 345. Given the packaging and formulation, that’s incredibly affordable! I highly recommend grabbing a shade or two (or three!) if you can, because if it sold out on their online store in under 15 minutes, then it’s probably going to happen in their retail stores as well.

Which Fluffmatte shade do you like most or are looking to get your hands on? Share them in the comment box below!
Clio Rouge Heel Velvet Review and Swatches Dr. Morita is Now Available in the Philippines