Hi, everyone! My good friend, Kai, recently reached out to me and asked me to help spread the word on her campaign against slaughtering thresher sharks in Cebu. Below is an article she sent, and I hope you guys can take the time to read so you can become more aware of this sad issue, and join Kai in her fight. 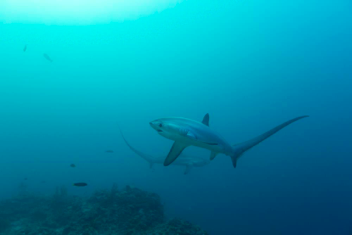 Across a shallow strait from the northernmost tip of Cebu Island lies the small, but idyllic Malapascua Island. The island is only 2.5 kilometers long and barely a kilometer wide, renowned for its fine, white sand beaches, making it a popular summer hideaway for Cebuanos. But it was only in the late 1990s when several scuba divers decided to look into stories circulating among local fishermen about long-tailed sharks and manta rays near the island. There, they discovered Monad Shoal, a natural cleaning station for pelagic fish like sharks and rays, much like what they had heard from the fishermen. 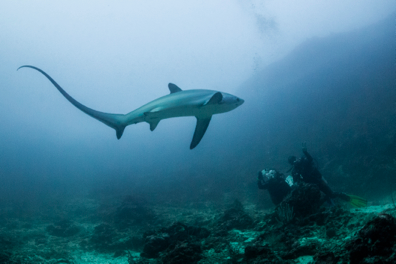 Today, the Philippines is the only country that boasts an established pelagic thresher shark dive industry. Monad Shoal is known as the only place in the world where scuba divers can see pelagic thresher sharks in the early morning hours almost every day. Due to its popularity and the destination’s dependence on this shark, Daanbantayan has declared its Municipal waters a protected area for sharks. Luckily, Cebu Province considers all sharks and rays protected in all its coastal towns.

Another prominent dive spot in the country, Batangas City, was the first to legislate protection for the thresher sharks, with Cebu following suit in 2012. These make the Philippines one of the few countries in the world to have domestic protections for these sharks but it is not enough. Beyond the jurisdiction of Batangas City and Cebu Province, there exists no law to penalize those who hunt, possess, or transport thresher sharks. And unfortunately, the Philippines is in a region where shark fin trade is prevalent.

In the Philippines, thresher sharks face a unique threat: reports in 2014 revealed that without fins, shark meat has low market value, sometimes retailing as low as Php 50/kilogram. Because it is cheap, thresher shark meat is the preferred meat for fish balls and seafood tempura. As a result of the high levels of fishing pressure linked to the international demand for shark fin, meat and byproduct trade, thresher shark populations have decreased in by over 70% globally.

Protecting thresher sharks through CITES
Come September, all three species of thresher sharks are proposed to be listed on Appendix II of the Convention on the International Trade in Endangered Species of Wild Fauna and Flora (CITES) by the Sri Lankan government and Republic of Maldives in Johannesburg, South Africa. A CITES listing is considered of one the best tools to ensure that global trade does not threaten the survival of a species.

The Philippines proposed the successful CITES listing of whale sharks in 2003. With a strong record in shark conservation in Southeast Asia, the Philippines is in a unique position to help conserve these shark populations. The Philippines will have to vote to support the listing of thresher sharks in September or in a bolder move, co-propose the listing with Sri Lanka and the Maldives. This presents the Philippines with an opportunity to directly change the course of this species’ future, while simultaneously boosting the local economy through well-managed and sustainable tourism operations, following the precedent set by established whale shark tourism communities, much like the one in Donsol, Sorsogon.

If this proposal passes, all international trade in thresher sharks would be regulated and encourage the Philippines to take the next step of fully protecting this species in Philippine waters – a policy that would go a long way in ensuring their survival for the benefit of generations to come.

Will the Philippines answer the call to protect thresher sharks globally? For more information, please contact:

To join the petition against hunting thresher sharks, sign here.

Giveaway Galore at Glamourbox The Beginning of 5 Randoms!