When I first heard about JK Rowling writing a detailed piece on Draco Malfoy‘s back story on Pottermore, I was ecstatic. Draco Malfoy is my favorite character in the series, not because he seemed like a hot bad boy or that he was portrayed really well by Tom Felton, but because I found his character to be one of the most dynamic. This was most seen in how JK wrote the sixth and seventh books. However, when the last installment of the movies came out, I was so disappointed with how movie Draco Malfoy was portrayed that I even wrote an article on why Draco Malfoy deserves better.

Tonight, three years later, my 22-year old self is given some form of closure after reading Draco Malfoy’s detailed life story on Pottermore. Since I hadn’t touched my Pottermore account in a while, I thought I’d have to recover my username or password but fortunately, I was able to log in the first try. (I still feel giddy each time I see that I belong to Slytherin.) There were two chapters I had to visit to unlock the story, and for those of you who are too lazy to log into your accounts (or if you can’t remember your usernames/passwords anymore), here’s the complete and detailed story of Draco Malfoy, with thoughts from JK Rowling herself. 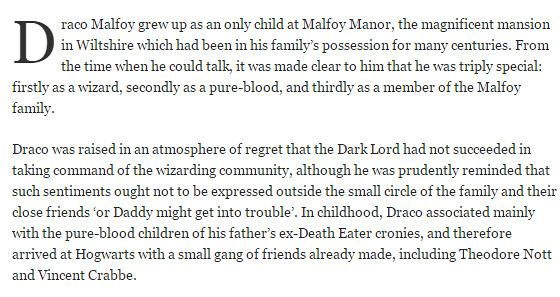 After reading all this, I think I’m going to start playing Pottermore again.