I think there’s always that one lipstick shade that automatically draws you towards the entire lipstick lineup and for me, the bait that got me hooked towards Color Sensational was the shade, Touch of Spice. It was the lipstick shade that both Georgina Wilson and I were wearing when I interviewed her around this time last year, and ever since, it’s been a staple in my makeup train case.

Earlier this year, when I attended the intimate brunch with Maybelline’s team, we were told that they would be launching a new collection from Color Sensational, and that they created a shade that was in the same color family as Touch of Spice—it was called Touch of Nude. Since then, I’ve been looking forward to the launch, and last week, they finally unveiled the collection called Powder Mattes. 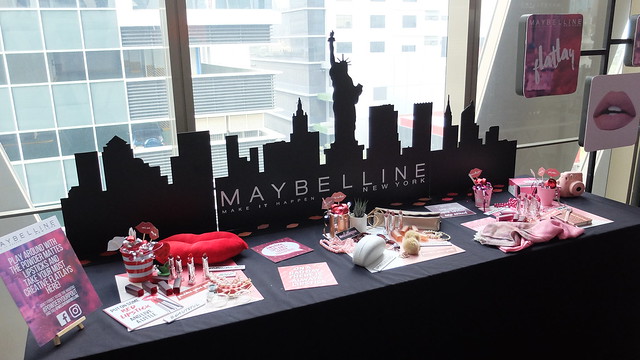 What differentiates Powder Mattes from Maybelline’s other matte lipsticks is that this one feels incredibly lightweight—you’ll forget you’re actually wearing lipstick! It glides on so smoothly, and before it dries to a matte finish, it has a comfortable, almost weightless buttery texture that moisturizes your lips and won’t leave them cracked or dry.

During the event, I was asked by Maybelline to be their correspondent for the day—as I took over their Facebook page and filmed a live video of what was happening. It was my first time to try doing Facebook Live, and I was so nervous! Eventually, I got the hang of it and I even got to interview Maybelline’s newest endorser: international supermodel and student, Kelsey Merritt.

I was lucky enough to take home all 15 shades of the Powder Matte collection, and just from a glance, I already knew which shades would end up to be my favorite: Touch of Nude, Mauve It Up, Barely There and Nude Illusion.

I’ll be swatching Touch of Spice and Touch of Nude in a separate article soon, just to show you guys the difference.

Maybelline’s Powder Mattes are already available online at Lazada for Php 299, and should be in stores nationwide. Have you tried the Powder Mattes already? Which shade is your favorite?