Though the spotlight on Quezon City’s food places may not be as bright compared to cities like Bonifacio Global City and Makati, it has still grown to become a foodie’s go-to place, with all the hole-in-the-wall restaurants sprouting left and right. There’s the long, colorful stretch of Katipunan and parallel street, Esteban Abada, both decked with casual dining (i.e. Katsu Cafe and Brickfire) to fine dining (Ninyo’s!). Let’s not forget the well-lit restaurants in UP Town Center, five of which I’ve already tried. Then of course, there’s the infamous Maginhawa and Malingap area, where you can find big names like Breakfast and Pies, Pino, and Burger Project. 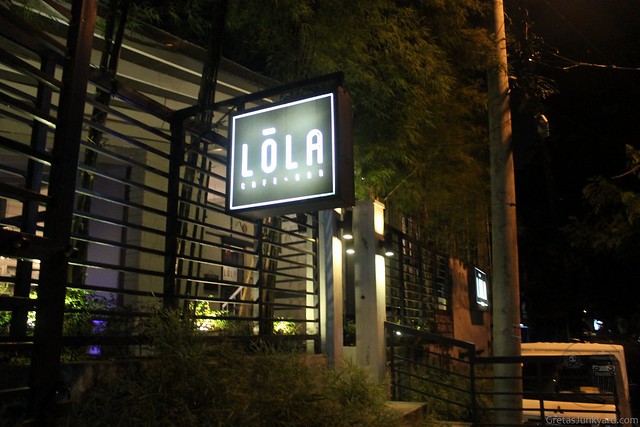 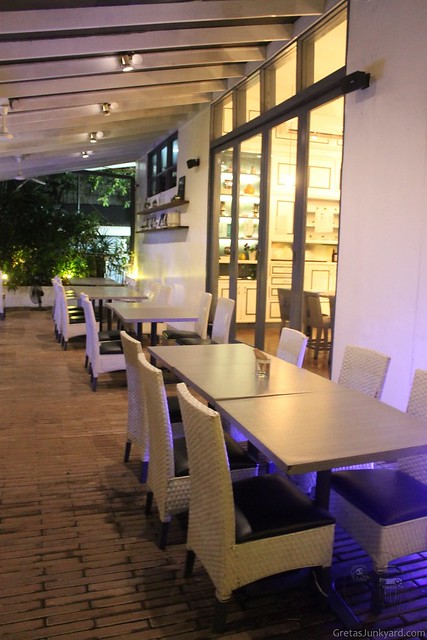 But an area in Quezon City that I think is underrated is the Tomas Morato area, where old houses have been refurbished to boast chic looks and some of the best comfort food.

That’s exactly what Lola Cafe + Bar offers, situated along the quiet street of Scout Lozano, amidst the hustle and bustle of Tomas Morato. I recently visited the restaurant with my family, and easily found it due to its well-lit sign, intricate exteriors, and cozy-looking interiors.

Their extensive menu had a variety of dishes and drinks. I even had the chance to sit down and chat with restaurant owner, Howard Dee, who explained the concept behind Lola Cafe + Bar.

Upon seeing it up close, it’s evident that Lola Cafe + Bar used to be a house, which belonged to a tight-knit family. When the family’s mother passed away, Howard and his partners were able to convince them to have the house rented out—promising that they would refurbish it and name the restaurant after their mother, Lola.

Since then, the restaurant soared—gaining its popularity through social media and word-of-mouth. What started out as a simple menu of pastas and salads evolved into more dishes, adjusting to the demands of their market—mainly Quezon City residents.

It’s an ideal place for an intimate dinner, or even to have drinks with friends as they’re open late. The inside is cool and quiet, while the outside caters to those who want to enjoy cocktails or glasses of wine. I’m sure even the Cupcake would love it.

I was fortunate enough to have tried their best-selling dishes, from appetizers up to the desserts. Their menu isn’t specific to any type of cuisine as it is a fusion of both local and intercontinental taste.

Three of their most well-known appetizers are the Beef Salpicao, Gambas Y Chorizo, and Pesto Fries. The salpicao was the right kind of tender with just a light taste—not too strong, while the Gambas Y Chorizo had a spicy kick. My sister really enjoyed the Pesto Fries, which were thick potato fries mixed with a flavorful twist.

The mocktails were a huge hit for us, as we ordered three different kinds: Beliz, Milan, and Tosca (Php 120 each). They come in cute mason jars, which make it even more fun to sip. And yes, they taste just as refreshing as they look.

If you’re a fan of dory fish, they have Baked Dory which they recommend that you pre-order as baking time takes about 30 minutes.

The Omurice is Lola’s version of longganisa wrapped in omelette and topped with aioli sauce and onion gravy. This was one of the most Pinoy dishes I tried on their menu and would be perfect for guys with big appetites since the serving is incredibly generous.

Fans of kimchi and kaldereta can rejoice in this dish, fusing the two together in one. The large bowl is good enough for two!

Two dishes that, without a doubt, seduce the senses are the Salmon and Tapa Benedicts. And again, since I love salmon, I really couldn’t get enough of the Salmon Benedicts.

If there’s one dish I instantly fell in love with, it was the Tartufo pasta—a pasta with cream-based sauce, truffle oil, and slices of portobello mushroom. The initial bite made me feel so giddy that I couldn’t stop eating! It was unlike any other truffle oil pasta I’ve ever tasted. The flavor was just right—not too rich or fulfilling, and not too light that you can barely taste a thing. It was perfection.

Sweet tooths will certainly go crazy over their desserts—especially the Banoffee Pie and Pistachio Pavlova. Their version of a banoffee pie had cold custard cream that literally melts in your mouth, while the Pavlova’s base was very similar to French macarons—only that the creme and mango toppings add a one-of-a-kind spin to it.

My family and I really enjoyed the evening at Lola Cafe + Bar. It’s a very simple restaurant rich in history and flavor. If you’re a foodie, make sure not to miss out on all things good that Lola Cafe + Bar has to offer. You’ll fall in love with their food just as much as I did.