Just to give a brief background on how my crush on Liza Soberano started—it was actually my youngest cousin, Jakki, who was the original Liza fan. She had one of Liza’s movies saved on her hard drive two years ago, and there was this one weekend she played it at my grandmother’s house. I was immediately drawn to her beauty and the way she carried herself—to think, I hardly watch local shows (I hardly watch TV at all unless it’s a Netflix or iFlix show). From there, my girl crush on Liza started. 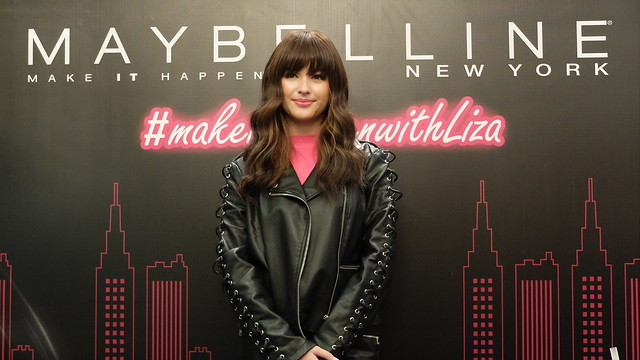 When Maybelline announced last year that Liza was the new Maybelline Girl, I was genuinely excited because I couldn’t think of a more beautiful, more confident and classier lady than Liza. She truly embodies what a Maybelline Girl should be, and I was so thrilled when the brand invited me two weeks ago to finally meet Liza Soberano in person.

It was actually quite an event because during that afternoon at SM North EDSA The Block, Liza gracefully entertained and interacted with unsuspecting customers who were browsing the Maybelline counter while waiting for her on stage. Liza took on the role of being a Maybelline Beauty Advisor—giving customers beauty tips and recommending the right products perfect for their needs. Liza even shared how much she had fun doing it, especially because it validates how much Maybelline has helped Filipinas be empowered through beauty.

After Liza’s performance on stage, we got to meet her in person at Lugang Cafe where I got to ask her what she loved most about being a Maybelline Girl and what her favorite product was.

With my two youngest cousins, Jakki and Pauline

In true Liza fashion of being elegant and eloquent, she told me that she loved inspiring Filipinas to become more confident with themselves and to not be afraid to pursue their dreams. It was always one of her dreams to become Maybelline’s brand ambassador—and to be in the same level as other global endorsers like Gigi Hadid just proves dreams do happen as long as you work hard for it.

As for her favorite product, she answered that it’s the Clearsmooth All-in-One Powder Foundation, which helps achieve a natural, shine-free and flawless coverage and was created to be twice as lightweight in order to make you feel confident. It’s available in all designated Maybelline counters nationwide for only Php 149.

I’m so happy I finally got to meet Liza Soberano in person! She’s truly as lovely in person as she is on camera, and I can’t wait to see her in more of Maybelline’s campaigns this year.